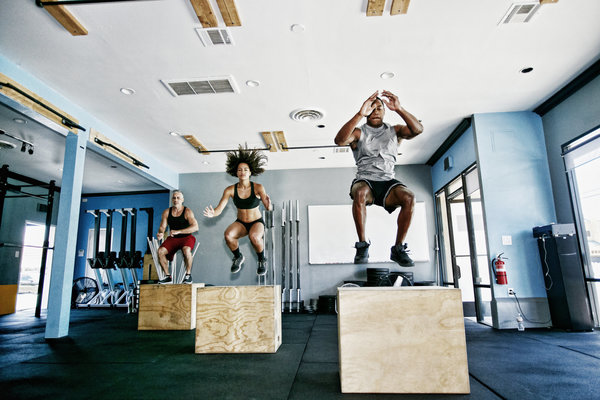 A new year is the ideal time to reassess your fitness goals and test-drive different endeavors for an even healthier lifestyle. Luckily, 2017 is almost here and we’re ready to get up off the sofa and try the latest and greatest trends. That’s right, we want to start 2017 off right! But how? And by doing what? To find out, we partnered with Curate Snacks and asked some of America’s top wellness and fitness insiders to peer into their stability balls and tell us what we’ll be hearing about, learning about and doing in 2017.[caption id="attachment_1691" align="alignnone" width="701"]

1.This’ll Be A HiitIf you haven’t already tried a HIIT workout, then 2017 may just be your year to give it a go. HIIT stands for high-intensity interval training and includes bursts of vigorous exercise alternating with recovery times. Mark Goodman, founder of Cardio High, says that interval-training workouts are more efficient, which means more overall exercise benefits with less time in the gym. “There is an increasing volume of scientific evidence that shows if you can go all out for one minute a day, that would equal 45 minutes of light jogging in terms of health benefits,” Goodman says. “People now understand that they can get a good workout in less time, and are looking to the future of the fitness industry to find creative classes and formats to achieve that.”2.You’ll Hear About HyggeHaley Canning of the blog Nourish Your Glow tells us we’ll be hearing a lot about hygge (pronounced hue-gah). The mysterious word is Danish and it describes a warm, cozy feeling one gets from taking pleasure in the simple and ordinary. “Many wellness trends have been restrictive and focused on removing things from your diet or life,” Canning says. “The concept of eating well and living a positive life is something I’m passionate about, but feeling guilty over eating a slice of cake or worrying how clean an item is does not. With hygge, the idea is to feel emotionally calm and connected. Everyone has their own variation of it, and there are no rules as long as what you do makes you happy. The idea here is to have to these things more and make them a daily practice.”3.You’ll Drink More MatchaMatcha. Matcha. Matcha. The Japanese powdered green tea will be everywhere in 2017, according to a number of the fitness and food experts with whom we spoke. Sarah Adler of Simply Real Health says that she thinks we’ll all be mad for matcha because it has the “healthy antioxidants, metabolism boost and healthy goodness of green tea, minus the caffeine spike and crash.” Adler’s recipe for a Matcha Latte can be found on her blog.[caption id="attachment_1689" align="alignnone" width="701"]

4.You’ll Immerse Yourself In ‘Experiential Fitness’Because, in her opinion, the majority of people are overstimulated and overscheduled, Jessi Duley of Burn Cycle predicts a rise in experiential and immersive fitness. Duley, a mother of two small children with more than 45 employees at her fitness company, says that when she has the opportunity to work out or get away, she really wants the time to “matter” — and she sees the same thing with her clients. It’s why she says she expects full-immersion–style fitness retreats to become more popular. They allow people to completely step away, reset, and step back into the hustle and grind with a renewed sense of clarity for their health and happiness.5.You’ll Work Out More, Due To ‘Fitnology’Autumn Calabrese, the creator of the 21 Day Fix and a celebrity trainer whose clients include Kylie and Kendall Jenner, believes that the popularity of wearables, social media, apps and other modes of technology has only “scratched the surface” and will continue to climb, making fitness more “accessible and affordable.” Calabrese explains, “It’s not so much a trend as it is a new way of life. Not everyone has time to go the gym or can afford a personal trainer. With access to new fitness technology, more people are able to find something that works for their health and fitness needs.”6.You’ll Learn To Defend YourselfJennifer Cassetta, a nutrition, fitness and self-defense expert who often appears on shows like “Today” and “The Doctors,” advises women to make this the year they learn to defend themselves. “I believe every woman should learn at least the basics of self-defense,” Cassetta says. “One in three women globally will be the victim of some kind of violence, and in the United States the statistic is closer to one in five. It makes sense for us to be teaching young girls how to protect themselves and for women of all ages to review these techniques throughout their lifetime.”7.You’ll Rest Easier By Unplugging MoreFitness trainer and blogger Mike Clancy says that he and his colleagues have seen a drastic decrease in clients’ abilities to “relax, rest and recover” properly. Clancy believes that in 2017, there will be a greater emphasis on the importance of disconnecting and unplugging at bedtime and rest times. “Our recovery methods as a general population are becoming a cause for concern,” Clancy says. “Sleep, while it’s understood to be a necessity, is now being treated as a luxury. Expect health and wellness professionals to become more vocal and specific about measuring rest times and encouraging better night routines.”